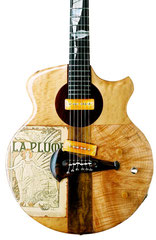 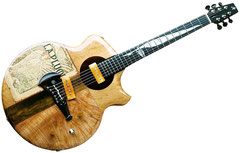 "Mucha’s cover for the magazine “La Plume”, #241, March 1899, themes another of the instruments.  “La Plume” was an important magazine of the era, dedicated to literature, art, and Parisian society.  Knowing that his art for the cover would be meant for mass production, Mucha was mindful of its arrangement and clarity of conception - a young woman stands with arms outstretched holding a giant feathered writing quill in her right hand which becomes the stately strident asymmetrical fingerboard motif.  Her figure is wrapped up in the wings of Pegasus, the mythological winged horse who sits behind her in a starry backdrop amidst Mucha’s stylized lettering and swirling tendrils." 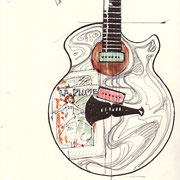 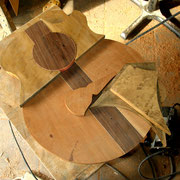 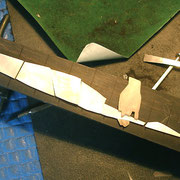 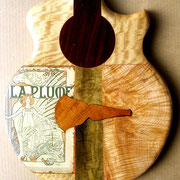 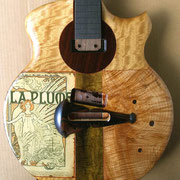 "The top is fashioned from Myrtle, Maple burl, and Poplar.  The colours and figures are all reminiscent of the stylizations in the lithograph - the sweeping panels of curving rectangles (which also inspire the fingerboard inlay), the softness and colour of her tangerine hair.   The quiet colours of mustard blonde, coffee-with-creme, and dark green are complimented by the burnt orange and sungold yellow pickups and butterscotch Catalin knobs.  The inlays are bone and pearl, and the feather-tip shaped selector switch is from a radio from the 1930s.  The bridge is fashioned from Macassar Ebony.  Mythology, artistry, and lutherie embrace to form an exceptional work of art."