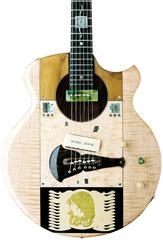 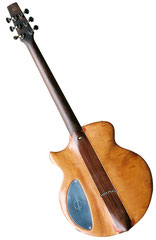 "This image of a ‘golden woman’ is from the back page of “L’Image” - a magazine of the period (this issue/image from the late 1890s) that depicted art and commentary of the day. I chose this image not because the artist was well-known (the magazine did not even note the artist), but because it was captivating, engaging, and cut from the same spiritual cloth as all of the more well-known artists and pieces in the Series. After several hours of viewing art with a seasoned art dealer who had been working with Nouveau prints for decades, this little wonder appeared and all but jumped into the family of art I’d been gathering. I was immediately reminded of Leonardo Da Vinci’s drawings of water, not because the image replicated the style, but because the depth, intensity, and quality were of the same family."

"The cream and mossy green image is framed with more Klein rosette artifacts which resemble her stylized hair, and the same rectilinear theme of the frame is represented in the extraordinary jewelry-like Abalone and silver body and fingerboard inlays.  The woods are Poplar, flamed Maple, Crushed maple, and Macassar Ebony.  The colours wed nicely - note the Poplar in the upper bout and its resonance with the colour of her hair and the neck pickup.  The overall atmosphere of gentle is enhanced by the blonde Maple and the dark mustard Poplar hues.  The woods, shapes, and colour choices simultaneously reflect and enhance the strength, character, and beauty of the lithograph.  The knobs are from a 1940s radio and the switch is Catalin."