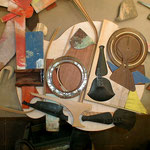 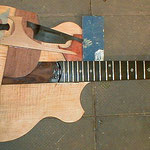 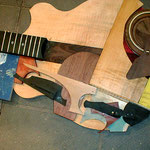 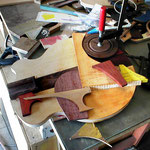 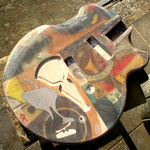 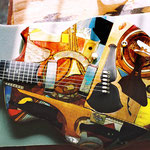 "Several years ago I had the opportunity to co-curate an exhibition of guitars at the Sonoma Valley Museum of Art in Sonoma, California with my friend and master luthier Steve Klein.  We called it “Art That Sings” (same as the title of a book I wrote about Klein’s life and works) and it featured an array of vintage and new guitars from collections internationally.

One maker represented in the exhibit was Michael Spalt.  I had seen some of Spalt’s resin-topped collage-art instruments that experimental guitarist Henry Kaiser had shown me, and found them whimsical, expressive, and artful.  Spalt is a fine artist from Europe who is deeply inspired by German Dada artist Kurt Schwitters – best known for his collaged paintings.  We had three instruments of Michael’s on display and they were much talked about during the exhibit.

Long being a fan of Klein Acoustic Guitars, I had the idea to have Michael create an instrument in a Klein Acoustic shape utilizing Klein Acoustic parts.  I had an old Klein neck and bridge, and I got a number of relics from Klein’s shop from the past thirty years to comprise the collage art.  I knew it would be visually stunning, but had no idea of how it would work musically.  When the prototype was done Michael sent it to me, and it was exemplary art indeed – aesthetically and tonally.

When I first received the instrument I was grateful that it turned out to be so visually profound – the shape along with the artfully rendered collage art proved wildly symbiotic.  I was also grateful for how comfortable the instrument was; given that the body is somewhat larger than the typical solid-body electric, I had been wondering about both the weight and feel.  After playing it for an extended period of time, the weight was not distracting (about the weight of a medium-weighted Les Paul) and the feel of the body was sensuous and inviting.

Musically the instrument is very gratifying.  Several of the instrument's features make for its exceptional tone - the Klein Rosewood neck, neck-through-the-body feel of the Cocobolo center section, larger-than-average body size, and custom Fralin pickups that sound a bit like Gibson mini-humbuckers that went to graduate school.  I run it through Vero amplifiers - a Gotham with four 10s and a prototype with two 12s - and the instrument delivers a broad array of tones from sparkly-with-dimension buttery crooning to full-throttled textured yelling and everything in between.

I’ve owned and played many electric guitars over the past forty years, and none please me more than this one."